The latest update on our new home!

The weather has remained largely favourable, (until the last couple of days!) so all has been progressing nearly as planned, albeit a little delay on the concreting commencing!

The initial concerns we had regarding Openreach & SPEN (power) did prove challenging, but with some “involvement” they are now both presently progressing to an acceptable schedule. 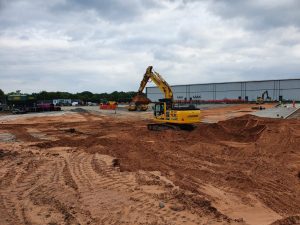 This picture is taken from close to the middle of the what will be the yard looking towards the corner where the office will be located.

Most of the sand they needed to remove from site has now gone, leaving the site looking much more open – you will note that concrete laying started a couple of weeks ago, and although a week later than scheduled, with good weather, we expect to catch up again! 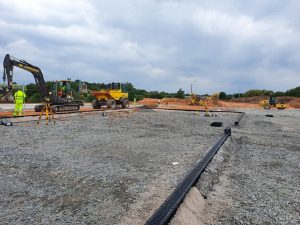 The above picture is taken from the east boundary which backs onto our neighbours, and shows the drainage grid that will sit around Maintenance Canopy workshop floor.  This area is 12m x 24m, so double the length and 2m wider than the existing canopy! 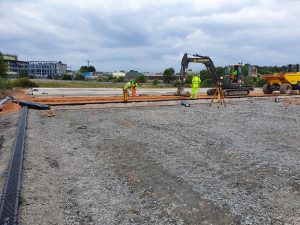 The above picture is on the east boundary looking to the south boundary and shows what will be the rear of the Maintenance Canopy, and some of the concreted area completed to date. 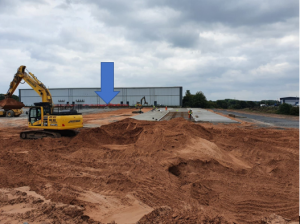 Another view from close to the centre of the site looking towards the east boundary, the arrow shows where the Maintenance canopy is shown in the previous images.

During the most recent meeting, the contractors confirmed they are still working towards the site being partially ready for occupation in January 2023, with the target being to move the office building onto the site in early December.  Once that is in position there will be up to 5wks on site work for Ad Modular to complete the finishing off work.

Watch this space for further updates!

You can find out more about which cookies we are using or switch them off in settings.

This website uses cookies so that we can provide you with the best user experience possible. Cookie information is stored in your browser and performs functions such as recognising you when you return to our website and helping our team to understand which sections of the website you find most interesting and useful.

Strictly Necessary Cookie should be enabled at all times so that we can save your preferences for cookie settings.

If you disable this cookie, we will not be able to save your preferences. This means that every time you visit this website you will need to enable or disable cookies again.